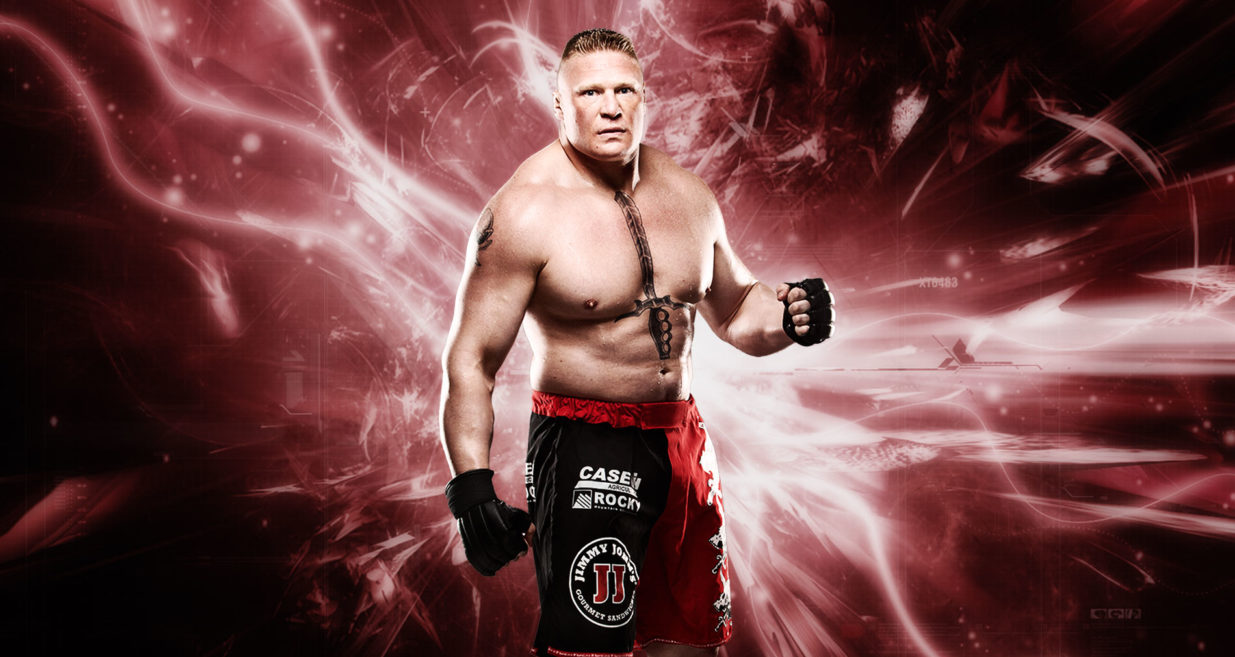 The Legacy of Brock Lesner

Hello everyone and welcome to my debut column here at topropebelts.com. My name is Joe R. Beason, and for the foreseeable future, I will be here with you each and every week giving my views on some of the bigger stories of the week in Pro Wrestling and Mixed Martial Arts. I have been a professional wrestling fan for well over twenty years and have followed the sport from many different angles over that time period. I started out, primarily, as fan of the NWA and WWF, but over the years, I have closely followed every major, and a lot of minor, promotions in the United States, while along the way, keeping track of wrestling from around the world. My background in MMA goes all the way back to UFC 1, an event I mistakenly ordered thinking it was some sort of worked shoot pro wrestling, like UWFi. Needless to say, it was something completely different, yet somewhat familiar, and I’ve continued to watch the evolution of the sport ever since. I know, for a lot of people, it tends to be either-or with pro wrestling and MMA, but for me it has always been two sides of the same coin. Both genres are centered around fighting for gold and glory, the only difference is one has a predetermined outcome and the other doesn’t.

I would like to encourage everyone who reads this to send me your feedback at jrbpryme@gmail.com. Tell me what you like, what you don’t like and what you would like to see in this area. I have been given a great opportunity here by Randy, and I would really like to create a weekly destination point for fans of pro wrestling and mixed martial arts to get a different take on their favorite sports. Your feedback is crucial to the development of this column because, at the end of the day, the readers will decide whether it succeeds or fails. Now on with the show.

As I watched Brock Lesnar crumble at the feet of Alistair Overeem last Saturday, a familiar phrase of my father’s kept popping into my head: “No matter how big or bad you are or think you are, there is always somebody bigger and somebody badder.” Not all that long ago, Brock stood atop the UFC Heavyweight division and was quickly labeled the “Baddest Man on the Planet.” Having followed Lesnar from his time in Ohio Valley Wrestling, through WWE, all the way to the UFC, I found myself having very mixed emotions. There is no doubt that Lesnar was a freak of nature with his size, strength, and incredible speed. He also had the ability to talk people into the building, the backing of the strongest brand of Mixed Martial Arts in the world, a legit aura about him and a championship belt that he won from a Hall of Famer, but still something about Lesnar’s rise never set right with me. In times like that, I always go back to the record books, and to see if after a second look Lesnar’s rise was as impressive as it was hyped.

Brock Lesnar’s debut in the sport came on the June 2, 2007 Dynamite!! USA PPV, against Min Soo Kim. This even was co-promoted by the now defunct and disgraced Elite XC, in association with FEG, the parent company of K-1 Kickboxing and its offshoot Hero’s MMA. At the time, Kim was 2-5, and as expected, Lesnar made quick work of his tomato can . . . I mean opponent, dispatching him in one minute and nine second of the first round. This performance earned him a shot in the UFC, where he faced former UFC Heavyweight Champion Frank Mir. Mir, a far cry from Lesnar’s first opponent in experience and skill, submitted Brock via kneebar at one minute and thirty second of the first round. Lesnar returned to the octagon six months later to win a unanimous decision over Heath Herring. Herring, at this point, was a competent fighter on the cusp of retiring, which he did after this loss, who had a decent career, but always came up short against elite level fighters. This left Lesnar with 2-1 record, a respectable start for a MMA career, but certainly nothing meriting a Heavyweight Title shot, right? Wrong! Lesnar had proven to the UFC brass that he was a legit pay-per-view draw. All of a sudden, money signs took the place of his record, and he was granted a shot at the Heavyweight Title.

On November 15, 2008, with less than 2 full years as a Mixed Martial Artist under his belt, Brock Lesnar defeated Randy Couture to become the UFC Heavyweight Champion. Couture is unquestionably one of the greatest fighters ever to step into the cage, and in some ways this victory was validation for Brock, that is until you dig a little deeper. By the time this fight rolled around, Randy Couture was 45 years old and had spent the majority of the last five years fighting at his natural 205 weight class. While he was successful in defeating Tim Sylvia for the Heavyweight Championship, many considered Couture simply a place holder in a lackluster Heavyweight Division. Sylvia was arguably the least legitimate Heavyweight Champion at the time of his reign, and Randy received his title shot right after a Light Heavyweight Championship loss to Chuck Liddell. It was a move seen to shift the highly popular Couture away from the star studded Light Heavyweight Division and back into the void of personality that was the Heavyweight Division. Needless to say, this was not Randy Couture at his best. Combine those factors with the tremendous size advantage that Lesnar brought to the cage, and a new champion was crowned.

From this point, the new Heavyweight Champion looked to avenge his only loss in the sport by once again facing Frank Mir. This time, Lesnar used his superior size and power to quite simply beat Mir down. His destruction of the only man to defeat him made it seem that Brock was growing into the role he had been given much too soon. Unfortunately, Lesnar’s progression was greatly sidetracked by the onset of diverticulitis, an intestinal illness that caused him to undergo surgery. Despite the fact that he rebounded from the surgery to return to the cage, you can’t help but wonder what the illness itself took out of Lesnar. This question loomed heavy over his head, as Brock prepared to face Shane Carwin. Carwin battered and bloodied the Champion in the first round of their Heavyweight Title fight, exposing a chink in the armor of the champion when Brock reacted very badly to being punched in the face. Although he proved he “had a chin” by surviving the first round and coming back to submit a completely exhausted Carwin, the writing was on the wall. You want to beat Brock Lesnar? Punch him hard in the face and watch him crumble. Just make sure you don’t use up all your energy before you can finish him.

Lesnar’s next title defense proved to be his last, as he was defeated by Cain Velasquez. Velasquez who entered the fight naturally, much closer to Brock in size, took Carwin’s “hit him hard and fast” approach but didn’t allow himself to become reckless. This left no doubt in my mind that Lesnar just wasn’t comfortable taking punches, and when matched up against someone close to his own size, his lack of skills exposed him. In other words, Brock wasn’t long for the fight game. Not too long after this devastating loss, Lesnar was hit hard again with his diverticulitis, this time costing him 12 inches of his colon. Despite a health scare that left him scarcely close to death’s door, Lesnar returned claiming to feel better than ever. Confident that the Heavyweight cash cow was back in the mix, UFC President Dana White opted to have Lesnar join him on the first UFC on Fox special to promote Brock’s next fight and provide “expert analyze” on the Heavyweight Title fight between Cain Velasquez and Junior Dos Santos. It seemed that the UFC was once again preparing itself to go full steam into the Brock Lesnar business . . . then along came The Uber-Reem.

On December 30, 2011, the man once touted as the “Baddest Man on the Planet” stepped into the cage with a man bigger than him, perhaps stronger than him, and by far more experienced than him. That man was Alistair Overeem, and he put Brock away in round number one. From the opening bell it was clear by Brock’s body language that despite all his words to the contrary, he didn’t want to be there. Lesnar seemed tentative in his movements, and after having a sloppy single takedown fail, Overeem unleashed his K-1 level strikes, and Brock simply wilted under the pressure. A few moments later, Lesnar announced his retirement from the sport.

Now that the hype is over, it is up to history to judge the validity of Brock Lesnar’s MMA legacy. As it turns out, despite all the asterisks next to his fights, Lesnar’s rise to the top of MMA was something pretty impressive after all. While I don’t see Brock as one of the all time greats, he is a heck of a lot closer to Bob Sapp than Royce Gracie. I say that not just in terms of size and skill, but also in terms of an extremely popular athlete, whose ability to draw money allotted them opportunities far beyond what they had earned. I find it somewhat amusing that despite Brock’s desire to get away from pro wrestling and prove himself as a “real fighter” in MMA, in a lot of ways, Brock never stopped being a pro wrestler. He sold pay-per-views off his aura and his ability to cut a promo, he pulled off a babyface turn, and in the time honored tradition, he left on his back.

2 thoughts on “The Legacy of Brock Lesner” 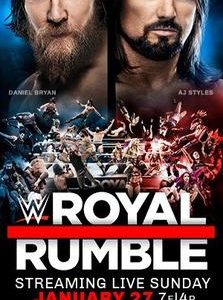 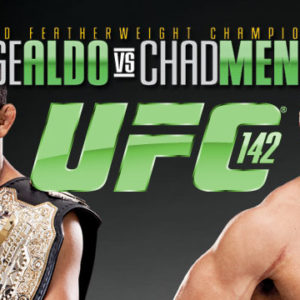 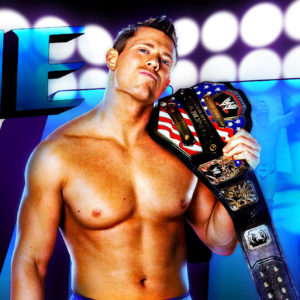